Book Club: “Sunbathing in the Rain: A Cheerful Book about Depression”

On top of the educational materials we offer at Erika’s Lighthouse, we make an effort to provide outside literature on depression. Along with 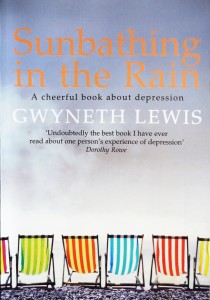 providing our readers with books and current news article , we bring in guest bloggers to share their favorite reads. The following post was written by Jill Axline, an Erika’s Lighthouse Executive Council Member. She shares with us her insight on the book Sunbathing in the Rain: A Cheerful Book about Depression, a guide to coming through depression from the eyes of a woman who experienced it.

Sunbathing in the Rain: A Cheerful Book about Depression by Gwyneth Lewis is an in-depth look at the experience of depression in mosaic form. Author, Poet, and television administrator, Lewis, integrates raw emotional experience, light-hearted anecdote, interpretive reflection, poetic reference, and witty metaphor to piece together a holistic look at her mid-thirties depressive episode. The narrative explores both circumstantial and inherited triggers, including an anxiety-laden description of her bifurcated career and a biting rumination about a turbulent relationship with her mother. The latter chronicles the evolution of disdain, and ultimately self-recrimination, as the adult child of an individual long-suffering with untreated, unacknowledged depression. Consequently, Lewis notes the importance of recognizing and embracing the experience of depression as a utility or an affordance, in an effort to see the experience as revelatory and guiding.

Lewis showcases the misery, apathy, nothingness, doubtfulness, and fear that accompanied her experience with poetic clarity. Drawing upon both her own perception of abstract thought processes as well as concrete fixtures in her living space, the author creates a virtual experience of the depressive state as one that exists both within and without. Additionally, the book reads in a syncopated rhythm to model the disrupted flow of thought that often occurs during depression. Even the text’s representation on the page and flow within the reader’s mind seeks to emulate cognitive clutter and inconsistency. She then punctuates her own thoughts and reflections with poignant references to contemporary media sources, philosophers, and poets to lend validity to the substance of her fragmentation.

A calculated benefit to the book’s non-traditional format is the reader’s ability to pick-up and put down the book as desired. Lewis suggests that getting through an entire book while in this state of mind or living with a loved one going through the state is unreasonable. Consequently, when the experiential portion of the narrative gives way to its overarching takeaway – depression as a guidepost rather than a hitching post – the fractured format reads like a highly palatable how-to guide for finding a silver lining. 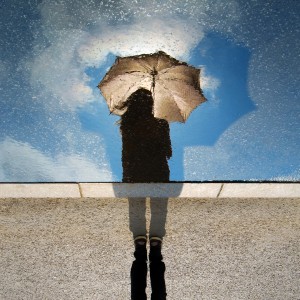 Lewis, as a central character, is not readily identifiable as a woman in her thirties skirting the line between a creative career and an administrative one. For many suffering from depression, her presentation as an erudite and reflection on only the most recent episode, rather than her first episode at a younger age, may be off-putting or difficult to engage. However, her raw emotional experience comes through the page and facilitates immersion into the depressive mind. Overall, the text may be a helpful conduit for readers who do not have personal experience with depressive pathology (i.e. parents, siblings, teachers).

At the book’s conclusion, we find Lewis feeling whole again and without lamentation for the ordeal she’s just been through. At its best, the journey highlights the unpleasant reality of going through an episode as well as the triumph of coming out the other side as a vulnerable hero and a wiser, 2.0 version of oneself.